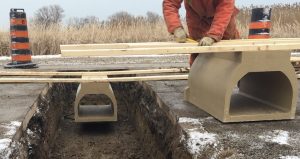 Eco-passages provide a safe route between Big Creek Marsh and Long Point Bay as well as letting water flow between the two. Norfolk County and Long Point World Biosphere Reserve Foundation are trying to come to an agreement as to whose responsibility it is to maintain the passageways. CONTRIBUTED PHOTO

Norfolk County is on its own now that the eco-passages project on the Long Point Causeway is complete.

Lee Robinson, Norfolk’s general manager of public works, presented a contract on future maintenance at Monday’s meeting of Norfolk council. Unfortunately for the county, the contract is only words on paper without a partner.

“They haven’t indicated that they’re done and ready to walk away,” Robinson said. “They just won’t sign this agreement.”

The Long Point World Biosphere Reserve Foundation might beg to differ. According to a spokesperson, the ball is in the county’s court from here forward.

Rick Levick of Toronto, co-ordinator of the causeway project on behalf of the foundation, said his group has “philosophical” problems with signing an agreement for the long-term care and upkeep of the eco-passages.

Thursday, Levick pointed out that many organizations have raised funds and improved infrastructure in Norfolk that the county has been happy to accept and look after.

The 12 culverts and passageways that have been installed beneath the causeway are no different than the hundreds of other culverts Norfolk maintains across the county, Levick said.

Levick added the foundation is uncomfortable with the open-ended nature of the contract the county prepared.

“There is no cost estimate as to what that would entail or a maintenance schedule,” he said. “The county is basically asking for a blank cheque and we can’t do that.”

Simcoe Coun. Peter Black said he is sympathetic to this viewpoint.

“If you understand how the biosphere operates, they get grants from other groups,” Black said. “They don’t have a pot of money, so I don’t blame them for not signing this. I think they thought that – once this infrastructure was in place – that the county would operate it.”

The eco-passage project cost $2.7 million and has taken 10 years to complete. The project was undertaken with funds raised by Levick and his associates.

When Norfolk was asked to consider the project, former public works manager Eric D’Hondt repeatedly advised council to get maintenance commitments from the biosphere foundation.

D’Hondt said Norfolk should not be on the hook for maintenance costs for infrastructure that the county would not otherwise install.

The biosphere foundation pushed for the installation of eco-passages because of the large number of snakes, turtles and other endangered species that were getting killed on the 3.6-kilometre causeway each year.

The eco-passages not only provide a safe route across the road between the Big Creek Marsh and Long Point Bay, they also allow water to flow freely between the two. This has been promoted as a major benefit for both ecosystems.

Save for some perimeter fencing to steer wildlife away from the road and into the eco-passages, the project is complete.