History of the Long Point Causeway 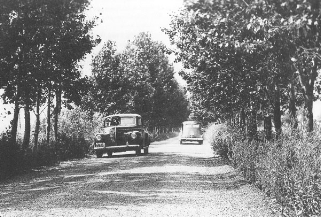 Here is the chapter on the Causeway from the book "Down by the Bay", a history of the Long Point and Port Rowan area from 1799 to 1999. This excerpt is published with the kind permission of its editor, Sharon Hazen of Port Rowan.

The chapter explains how the present Long Point community was preserved for public use thanks to the foresight and actions of several Port Rowan residents who persuaded the Ontario government of the day to pass legislation that made its Crown Land on Long Point a public park. These same thoughtful citizens then lobbied the Province for funding and permission to construct a causeway from the mainland to Long Point to provide access to the beaches of Long Point.

Historical photos from Day on the Bay are included in the Photos and Maps section of this website.

Some time after the turn of the century, it was realized that although the land the Old Cut Lighthouse was built on belonged to the Long Point Company, some 400 acres to the west of the Cut was still Crown land. The Company was not too interested in the lighthouse land being returned to them when it ceased to be used for that purpose but others began to take an interest in the area. 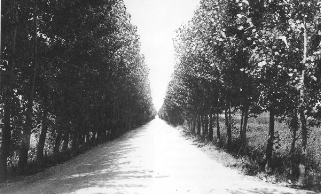 The Crown Lands Department in 1920 ordered a survey done of this parcel, and it was rumoured that they planned to offer it for sale. John L. Buck, reeve of Port Rowan, fearing the land would be lost to commercial development, lobbied Premier Drury to declare it a public park. On May 23, 1921, it was so designated under the Long Point Park Act. To remove it from the taint of being a political ploy, Mr. Buck declined a position of the commission that was established to administer the new park. The commissioners appointed were J.A. Gleadall, T.D. Pierce and Dr. W.A. Broddy, all of Port Rowan.

The commissioners produced a plan of subdivision for the park which was approved by order-in-council of the provincial legislature on May 22, 1923. The public was able to make very little use of their new park, however, for the only means of access was by shallow-draft boats. Reeve Buck continued to seek improvements and, in 1926, he called a meeting at his home of interested parties, to address the problem of access. One suggestion was the investigation of the feasibility of building a road across the eastern edge of the Walsingham marsh (now Big Creek Marsh) from the mainland to the south beach. Everyone present was intrigued by the idea. 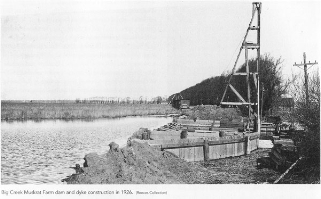 The Honourable John S. Martin, MPP for Norfolk and the Minister of Agriculture at the time, was contacted at his home in Port Dover. He, in turn, arranged a meeting of the Port Rowan people with Premier G. Howard Ferguson, on having the plan for a road explained to him, saw merit in it. The money was soon in place and construction of the causeway commenced in the summer of 1927. Three short bridges were built to link existing sand bars. A wooden bridge was built over Big Creek whose original outlet was at the southern end of the sandbars. The dyke, which controlled the water levels in the marsh to the west, presented the biggest problem, and required the construction of a bridge 220 feet in length. The remains of it and the wooden pilings of the dike can still be seen on the west side of the Causeway, not far from the south beach.

The toughest and dirtiest job was the removal of the overburden of black muck of the marsh to get down to a solid base for the road itself. A great many local men were employed, at 20 cents a day, in building the road with shovels. Many local farmers and their teams of horses were employed with slush scrapers as well. Frank Trickett remembered horses up to their bellies in the stinking ooze of the disturbed marsh, which had been decaying undisturbed for centuries. 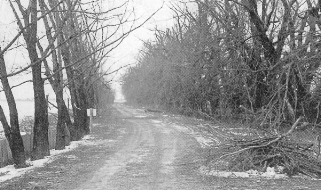 A solid roadbed had to be built, and the men dug blocks of clay from the marsh north of the beach road to place them on the newly-cleared right of way the following day. A mattress of hay was next put in place and gravel both from the beach and from farms nearby was drawn in. The temporary beach road was filled with hay to carry the loads of gravel safely over the sand beach without becoming stuck. Stone was also drawn from the Hagersville Quarries at 20 cents a ton. By 1928, a solid road was in place from the mainland to the sandy beaches of the park. Willow whips were put in on either side of the new road to stabilize and hold its earthen banks. In the meantime, the original commission had resigned.

On June 6, 1928, another order-in-council appointed a new commission with John L. Buck and Kenneth McCall and A.A. Ferris as members. A comprehensive set of bylaws was drawn up by them to govern the park. It set out licence and rental fees and provided for fire protection. Chairman Buck next approached the Long Point Company to negotiate an additional 141 acres of their western boundary to be joined to the lands of the park. The commission next negotiated an agreement with Harry Hastings to provide him with unobstructed use of their new road in exchange for an easterly block of land he owned both east and west of the new Causeway where it joined the south beach. With access assured to the beach, Hastings’ westerly holdings became much more valuable to him for cottage development. 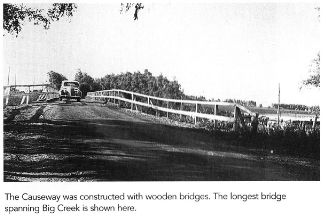 With the cooperation of Edward J. Zavitz, founder of the first reforestry station in Ontario at St. Williams, and its superintendent, Frank Newman, blocks of scotch and jack pine were planted over the sand dunes of the park. This provided work for more than 100 Port Rowan men, and soon stabilized the barren sandlands, which had little cover save some scattered cottonwoods. These plantings soon added greatly to the stability as well as the beauty of the park.

In June 1932, the Long Point Park Commission erected stone gates and a plaque to commemorate the considerable effort expended to produce a reliable road to the growing cottage community in the park. They were demolished and buried when the road had to be widened.

On begin asked a few years ago when the Causeway was finally finished, Pete Overbaugh replied, not entirely in jest, “Well, it never was!” Storms and high water continually took their toll, requiring constant maintenance and repair. It was raised several times over the years. In 1950, it became the responsibility of the Province when it was made an extension of Highway 59.

Although it is a great boon to the cottage owners and thousands of tourists who visit Long Point annually, the Causeway is responsible for the demise of a great many turtles, snakes and amphibians that daily attempt to cross the road from one side to the other during the period of greatest vehicular traffic. It has also restricted the normal flow of water in and out of the big marsh, with the resultant stagnation of parts of it and adverse effects on its native wildlife.

Interview with Pete Overbaugh about filling in the original mouth of Big Creek:

“I’d like to tell you about the old Dike Bridge. This was a wooden bridge, 220 feet long that ran between the present day Sandboy Marina and Norm’s Marina. The bridge had gotten so rotten that it was hardly safe to walk across.

“It certainly wasn’t safe enough for a truck to go across it, so something had to be done about it. This was in the 1940s.

“A lot of people had built over there and if the bridge went out it would be out for Lord only knows how long. The Commission had this construction company come down from Toronto and all that came was a big front-end loader.

“But before all this happened, Wilfred Barber and myself went over there and we decided we had better measure the depth so they would know what fill was needed.”

“I bought two 20 foot lengths of half inch gas pipe from Howey’s Hardware. I put the first 20-foot length down and then we put the other 20-foot length on top of that and almost every seven or eight feet it would hit something just a little bit harder and we’d have to push it through.”

“Well, we had the 40 feet of gas pipe down and that wasn’t enough so I went back to Howey’s and bought another 10 feet to put on the end of it. I decided not to go any farther but I’m sorry now that I didn’t because I’d like to know how deep that was there.”

“We were going through black muck, no sand, just plain muck. That’s what you drive over every time you go to the Point, over what had been 50 feet of floating muck! Well, they filled those 50 feet with clay that came from my farmland.

“The clay kept disappearing and we wondered where on earth it was going to, and the black muck kept boiling over the sides of the road. At times, we had six or seven trucks bringing in clay. From the time the loader started working in the morning it would be sending out loaded trucks about every 10 minutes.

“We tore out the bridge in sections and at night we tried to leave it so if anybody did have to get over there, there was a way for them to do so. They could use a park of the old bridge and the rest would be the new fill."