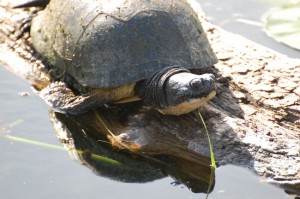 Construction is expected to start next year on more eco-passages to take turtles, snakes, and frogs safely under the Long Point Causeway.

A group of concerned citizens, which installed three tunnels under the roadway last fall, announced Wednesday they have received another $211,500 in provincial funds.

Combined with $223,000 in federal grants from earlier this year, the Long Point Causeway Improvement Project says it has enough money to build at least four, and possibly six, new passages.

LPCIP co-ordinator Rick Levick said the group’s next step will be to approach the county, which owns the road, to get the approval process moving.

“I’ll ask council for their blessing,” he said.

The group got together about seven years ago to try to do something about the large number of animals — many of them on endangered lists — getting killed on the road as they migrated back and forth between the marsh and Long Point Bay.

The area is considered to be one of the most ecologically sensitive in the world and has been given a world biosphere designation.

Low fencing made from a woven plastic went up and, said Levick, immediately cut roadkill numbers in half.

The tunnels that were added last fall — two dry and one with flowing water — were put in at “roadkill hotspots” and are meant to offer animals alternative ways to make the crossing, he explained.

Monitoring by the group shows the first three tunnels have helped, Levick said in an interview.

“We do have solid evidence animals are using the passages,” he said.

For the first stage of the project, the group spent two years and $160,000 on getting approvals, which included an environmental assessment of the impact the tunnels will have.

“We’re hoping it will be easier, more cost effective, and faster this time around,” said Levick.

Their goal, he said, is to get the passages done before the county goes ahead with plans to repave the road in 2017-18.

The next tunnels will be “dry” and are very much like culverts found under rural roads, Levick said.

In the long run, the group would like to add another three “aquatic” passages, which allow water to flow between the marsh and the bay. That would give the causeway a grand total of 12 passageways.

However, they are more complicated and expensive to build and require dredging of channels, said Levick, a longtime cottager at Long Point.

“I’ve been coming here since age three,” he said. “When I drive across the causeway and don’t see dead turtles, frogs, and snakes, it’s a good day.”

A second citizens group on the point, the Friends of the Causeway Association, have opposed the LPCIP’s project.

It says there are better, more cost-effective ways of protecting endangered species and have warned the marsh could inadvertently be drained by the aquatic passages.