Slow and steady saves the turtles 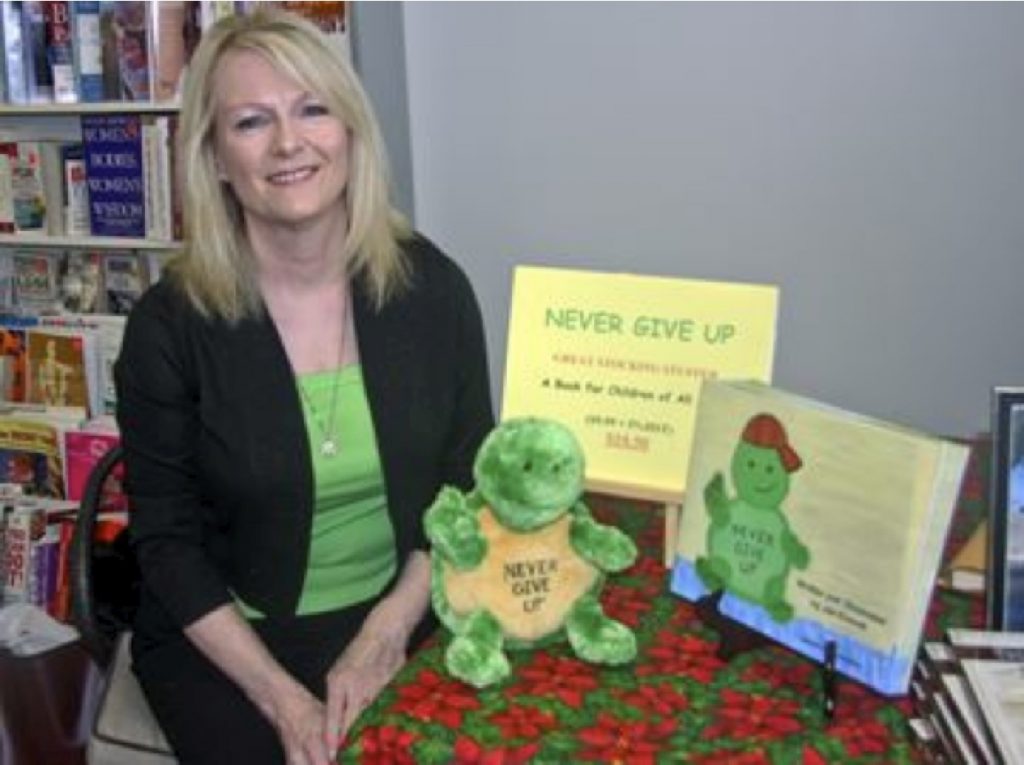 By Katie Starr, Norfolk News
It started with a birthday present.

After giving her baseball fanatic husband John tickets to a Cubs game at Wrigley Field the year before, Jan Everett knew the pressure was on for birthday number 61. “So I decided to write him a book,” Everett said at her book signing in Simcoe last weekend. “It was something I had just giggled about doing before, but the words and illustrations just came to me.”

Everett’s gift wasn’t just any book, but a children’s story called Never Give Up about a boy named Johnny who saves turtles. It was inspired by John’s own work helping turtles cross the treacherous 3.2-kilometre stretch of road on the Long Point Causeway.

In past years, the causeway has seen hundreds of animals struck and killed by traffic. Bordered on the west by the Big Creek marsh and on the east by Long Point Bay, the road must be crossed by animals to hibernate, mate and hatch their eggs.

The installation of three underground wildlife culverts last year – also known as ecopassages – accompanied by 4,500 meters of barrier fencing along the length of the causeway has significantly decreased the rate of reptilian and amphibian road kill. Volunteers like John Everett have also been a big help in preventing animal deaths.

“He never goes anywhere without a shovel in his car in case he needs to pick up a turtle and help it cross the road,” Jan Everett said. Armed with his trusty shovel, the Long Point resident and self-appointed “Turtle Man” saves between 15 and 30 turtles each year, ranging in size from the diameter of a loonie to over 3.5-feet wide.

The book was a huge success with the birthday boy, but John wasn’t the only one to love Jan’s tale of Johnny and Snapper the Turtle.

Rick Levick, co-ordinator of the Long Point Causeway Improvement Project Steering Committee that’s behind the culverts and fencing, heard about the book and immediately thought it would be a good fit with his organization. Author and organizer teamed up to publish the book, with all proceeds going to the Long Point Causeway Improvement Project. For Levick and the Everetts, helping to save wildlife comes with the responsibility of living in a World Biosphere reserve.

“There are over 600 biosphere reserves in the world, and only 16 in Canada,” Everett said. “We’re so lucky to be living here, but we need to protect it. If my book can help raise awareness, that’s just wonderful.” The goal of the causeway committee is to reduce road kill rates so that the populations of turtles and other animals are sustainable, Levick said.

“The way to do that is really a three-pronged approach that includes the culverts, the barrier fencing and people like John and Jan who are really passionate about saving these animals.”

In Everett’s book, Johnny builds a culvert under the causeway to help his turtle friend safely cross. “When I read Jan’s book, I just thought it perfectly captures what it is we’re doing with the culverts and most importantly, why we’re doing it,” Levick said.

The culverts have caused some controversy, with a citizens group in Port Rowan questioning the necessity of the ecopassages at council last month. Friends of the Causeway Association has asked council to hold off on nine additional culverts planned for next fall, arguing that the existing fencing is enough to prevent animal deaths.

But Levick said the culverts and fencing complement each other. “The fencing reduces road kill and the culverts allow the animals to move where they need to go. When there was just fencing, the turtles were figuring it out. They’d hit the fence so they would travel until they got to the marina and cross there,” he said. “Animals have been crossing the causeway from bay to marsh for 3,000 years, so a fence isn’t going to prevent what’s in their DNA. They need to cross, and we can use our brains to help them do that in a safe way.”

The combined effect of the culverts, fencing and volunteers helping animals across the causeway is working. In the three years since the project began, road kill rates have dropped by more than 50 per cent, Levick said. “If I can drive down the causeway on a warm summer day and not see any road kill, it’s a good day,” he said. “And we’re getting there.”

A public information meeting on the nine new wildlife culverts planned for fall 2014 will be held at the Port Rowan Community Centre on Wednesday, Dec. 18, from 5 p.m. to 7 p.m.