Watch out for turtles 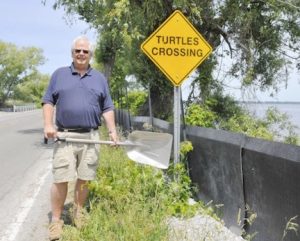 Members of the Long Point Causeway Improvement Project (LPCIP) have long advertised the need for motorists to slow down and watch for turtles crossing Norfolk County roads in search of nesting sites.

That message is generally delivered in the springtime but comes a little later this year.

“This is probably the coolest spring we’ve had in a long time and we have not seen very much activity on the causeway,” noted Rick Levick, a coordinator with the Causeway Improvement Project.

“Once it warms up, they’re going to start moving. They’re driven by their need to get to nesting sites or where they want to spend the summer. They move across the road for those two reasons and that’s when we can have problems with cars.”

According to LPCIP numbers, mortality rates on the causeway have decreased significantly in recent years. The 53 reptiles killed in 2015 was the lowest amount ever recorded and is a stark contrast to the 248 deaths seen in 2008 when the LPCIP began its campaign. Much of that success can be derived from both culverts and fencing being erected at high-traffic areas in Long Point.

“The other part of this is basically people changing their attitudes and taking the time to watch for the animals on the road and in some cases help them across the road,” Levick noted.

Depending on the species, female turtles can lay up to 12 eggs per year. Studies show the older the turtle the more likely their eggs are to hatch. The unfortunate fact is some never get the opportunity to reproduce due to motorists.

“At this time of year it’s usually the adult females that are moving to look for nesting sites so you could very well be killing a female that is on her way to lay eggs,” Levick explained. “If you do that year after year you run out of female turtles to lay eggs. That means your population goes down the drain.”

Though Levick and the LPCIP have Long Point in mind, they want to make sure motorists driving near all wetlands are keeping an eye out.

“We’re not going to be able to fence every road in Norfolk County that is beside a wetland so this is really a general message that if you’re driving through an area where there’s wetlands along the side of the road, keep your eyes peeled,” Levick said. “Because there’s likely going to be a turtle on the road.”